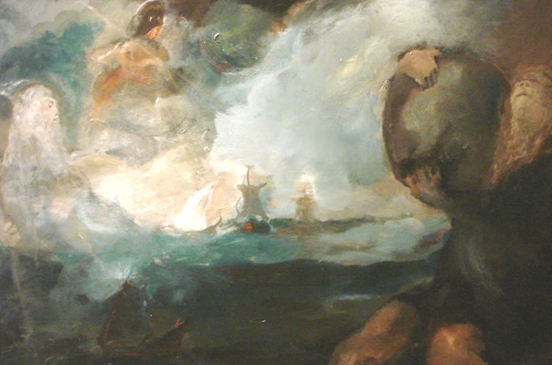 Kostantinos I. (Kostas) Kampouropoulos (1939-2018) was born in Athens, Hellas during the declaration of World War II and lived there all his productive years, until the end of his life. He studied law at the Law School of the University of Athens and has been practicing law for 45 years. Along with his profession, he studied classical singing (deep-fledged) at the National Conservatory. He participated professionally in many vocal ensembles while appeared individually in many recitals and concerts as a soloist.

He is a self-taught in painting. He made his debut the autumn of 1981 with a solo exhibition in the Syllogi Art Hall, attracting praise. More solo exhibitions followed in such places as the Ora Hall (1984), the Hellenic and Foreign Press Correspondents’ Hall (1984), the Democritus Hall (1988), (1992), while in the late ‘90s he participated in many group exhibitions in Hellas (e.g. in cooperation with the Municipality of Athens) as well as abroad, especially in Germany. Between 2000 – 2008 even more successful solo exhibitions took place such as in the Hotel Hilton of Athens, in the Multipurpose Cultural Centre Athinais (2003) or in the Museum of the City of Athens (2008). Solo was his last exhibition, as well, with the title Air Floatings at the Tsichritzis Foundation for the Visual Arts, in Kifissia (Athens) in January 2016.

Exceptional and extremely successful was his participation in the Malta International (105 countries) Art Biennale in 2001 (2 June – 1 October) where he has been distinguished with a Special Distinction Award for his painting.

His works decorate a large amount of public buildings (Hellenic Parliament, Areopagus, Arsakeio Megaro, Museum of the City of Athens, etc.) and are found in many private collections (belonging either to individuals or institutions such as the Archive of Alpha Bank, Museum of the City of Athens Vourou-Eutaxia, Municipality of Kifissia and more). It has been lexicon-graphed in vol. 2 p.103 of the widely known Lexikon of Hellenic Artists by the Melissa Publishing House, while photographic material of his works has been published occasionally.

The majority of his artistic production is oil paintings on canvas and, rarely, on wood. He used to work with oil and rarely with light materials (only in drawings or aquarelles mostly of caricatures). His style is basically based on painting of forms (Visionism) in a combination of romantic elements with surrealistic – expressionistic structures. The subject matter of his artistic production appears unusual, with references mostly to the Western European past, music, theatre, folk legends, the Bible and still life. The themes may be divided into the following main categories: Mythological/Historical/Religious/Seascape/Musical drama/Literature/Landscape (mainly in combination with human figures)/Portrait (mostly combined with the categories of music, history and literature)/Still Life and a collection of soft works (drawings, aquarelles, mixed media).

He is the author of the books:

Renowned art professors, critics and journalists have been extendedly referred to him and his work either in the Press or in the accompanying printed catalogues of the exhibitions such as: Art and Life, prof. Stelios Lydakis, Eleftheros Kosmos Newspaper (8 November 1981)|Looks at exhibitions, Dora Iliopoulou Rogan, Kathimerini Newspaper (12 November 1981)|Solo exhibition in Ora Hall, text in catalogue by prof. Nikos Zias, Athens, Hellas (1984)| Solo exhibition in Democritus Hall, text in catalogue by N. Lountzis – T. Fountea, Athens, Hellas (1992) etc.

Artist’s note: A statement by himself from one of his unpublished books, regarding his painting, is as follows:
‘I am a Hellenic painter. I was born in Hellas by Hellenic parents and I live in Hellas. I have spent my seventy year and I am at the end of my creative life. I stress that I am Hellenic and modern, since I quote my age. My painting, however, is not Hellenic, in the sense that it does not have any of the elements that usually compose the so called ‘Hellenicness’ of the works, at least of the traditional Hellenic painters. I do not paint landscapes with the unprecedented Hellenic light, beaches, with or without boats, with their worldly uniqueness, scenes of everyday life of today, etc. None of these. My painting has dark tones, but my seas, wherever they come from, always in association with a narrative, are usually wild (not just wavy but with an underlying threat).  Furthermore, my painting is not modern, in terms of its subjects, especially the portraits, the objects or images of life, whenever they are made, are inspired, in their overwhelming majority, by historical earlier and distant seasons.

I am dominated by three basic forces that uncontrollably undermine me. The worship in the tradition of the great creators of the European West, without excluding a ‘sloping slope’ (Empeirikos in ‘Upstanding the Silence’); my inherent tendency to everything that can be expressed, whether is history either fiction or poetry and The heavy presence of the music on me that overwhelms my work and guides it. There is not a single painting or drawing or caricature or a visual composition of any form that does not accompany the creation of the murmur or (rarely) the simple reference of the title of a music. I’m attached to the classical music that I have studied and loved but mainly to the classic song I have served for years. It would not be an exaggeration to believe that music, many times, not only co-produces with the work but also comes out of it.’

Curator’s note: Kostas Kampouropoulos was an exceptional figure of his ages. One of the greatest Hellenic post-war painters.  Extremely well educated and cultivated with great interest in music, opera, theatre, poetry, literature, history, art, etc.
Thereafter, his cultural interests and his tremendous knowledge inspired his whole art production. In particular, as mentioned above, being passionate about classical music and classical song, the analogies between musical and painterly composition were central to his work. Even the titles of his paintings were mostly based on musical themes, directly, while especially meaningful was his musical arrangements either of colour harmonies or colour tensions. He formulated a specific type of expressionism that gave him the ability to express his personal feelings for the music roles he had the chance to perform and the scenes of the opera acts he participated in. Just like the melodies of lyrical music, he sought to create for his ‘audience’ mental images of high emotional charge and effect, in the form of a fascinating psychological drama.
This aspiration to musicality would give emphasis on tonal variations of a preferred dark coloured palette which, along with his freedom to abstract its subjects and his romanticism approach of expressing not only what is seen but what is unseen, described Kostas Kampouropoulos’ exceptional atmospheric and ‘air floating’ style. As he himself observes ‘The line, defined as a contour of the depicted subjects, is completely absent from my work. The line is not carved. It arises. And it arises through the colour. This drawing through the colour either is detailed (rarely) or (usually) elliptical, provoking the observer to complete what is missing with what he feels that fits into the composition. In other words, the observer is invited to complete the work. The lines, when embrace or being used supportively for faces and objects, whenever they exist, are obscure and dazzling. In this sense, the subjects almost float in the air.’
Everywhere a romantic ‘visionism’ with surrealistic extensions is diffused. Portraits, depicted figures, forms, narratives either historical or imaginary, in their solidity and simplicity, in vague, fluid contours suggest something upper and symbolic. Misty scenes, transparent visions and spiritual effects outline his multiplex personality and bring out to interpretation his signature sense of minimalist sensibility. ‘…the grounding of the vision cannot be made on solid boards but in clouds, either bright or dark, like the clouds of the slumber.’